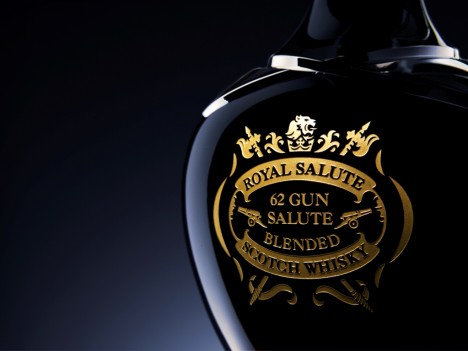 Aimed at the Asian market, 62 Gun Salute will be the flagship product in the Royal Salute range.

It is produced from whiskies aged for a minimum 40 years and packaged in bottles created by Dartington Crystal.

The exquisite hand crafted crystal decanter is decorated in 24 carat gold and crowned with a cut crystal stopper.

It is not a limited edition and, whisky stock and demand permitting, Pernod aims to produce 5,000 bottles per year. Royal Salute is a leading prestige Scotch whisky, launched on the 2nd June in 1953 by Chivas Brothers in tribute to Queen Elizabeth II on the day of her coronation.

Queen Elizabeth was presented with the first bottle of Royal Salute, decorated with her royal crest.

The brand is continuing the royal association and its new whisky takes its name from the annual celebrations of the Queenâ€™s coronation, â€˜62 Gun Saluteâ€™*, a time-honoured tradition that takes place at the Tower of London each year.